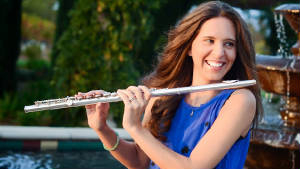 Kate made her solo piccolo debut with the Colorado Symphony Orchestra at age 18.  Additionally, she has been a soloist with the Indiana University Wind Ensemble, the Denver Concert Band, and in 2007 with the All Valley Honor Band in Temecula. Kate has been invited to perform at the National Flute Association Convention numerous times, and is honored to have been invited to many other notable flute festivals in the United States.  She has performed solo recitals throughout the United States, Japan, Germany, Austria and the Czech Republic. Her 2010 schedule includes a series of solo recitals with the Golden Valley Music Society, a woodwind quintet project, and several recording projects. She recently premiered “Flash!”at the NFA convention in New York in August. As a soloist, Kate has recently been working with world renowned composers in expanding the piccolo repertoire. In 2001, composition faculty at USC Frederick Lesemann wrote “Slow Music for Piccolo Alone” for Kate. In 2008, Daniel Dorff wrote the ever energetic show piece “Flash!” Also in 2008, James Sharp wrote “Piccolo Sonatina” for Kate. These two new compositions were written and entered in the International Piccolo Symposium’s composition competition. “Flash!” was the winner of this, and is available through Theodore Presser, or Flute World. Currently, Kate is working with Martin Kennedy on a new work for piccolo to be premiered in 2010.In addition to her flourishing solo career, Kate is a member of the Inland Valley Symphony in Southern California. She also performs regularly with several musical theater groups in the Temecula and Murrieta valley, as well as actively playing with collaborative chamber music groups for community development and outreach events sponsored by the Arts Council of Temecula Valley.

Ms. Prestia-Schaub enjoys teaching a studio full of dedicated flute students in her home in Murrieta California. Her students participate in a variety of activities including: the Certificate of Merit program sponsored by the Music Teachers Association of California, Music Teachers National Association Music Study Award program, San Diego Flute Guild festivals and competitions, SCSBOA solo and ensemble festivals, two recitals per year, and she invites students to participate in community service programs for senior citizens in the area. In addition to her studio at home, Kate is invited several times a year to facilitate piccolo and flute master classes at various Universities and Flute Festivals throughout the country.  During the school year, she serves as the “Flute Coach” to Murrieta Valley High School and Shivela Middle School. During the summer months, Kate teaches the “Summer Music in the Valley” program sponsored by the Temecula Valley Arts Council.  Kate is on the adjunct faculty for the Idyllwild Arts Academy in Idyllwild, CA where she gives master classes and sectionals for their high school flute section. Ms. Prestia-Schaub’s teaching positions have included The Seoul Academy of Music (Van Nuys, CA); The Korean American Academy of Music (La Crescenta, CA); the Old Town Conservatory of Music and the Performing Arts (Pasadena, CA); and the European School of Music, (Torrance, CA).

In addition, Mr. Prestia-Schaub served as the development director for the Old Town Conservatory in Pasadena from 2001 to 2006. There, she wrote grants for community outreach music education programs and scholarships for the Conservatory Youth Orchestra program.  She created, developed and taught the “Adventures in Music” program in participating elementary schools in the Pasadena area.  Currently she is serving on the board of the San Diego Flute Guild, the Music Teachers Associated of California, and the advisory committee for the National Flute Association.